Holidaying in the UK in winter can be rather satisfying.  Mainly because you don’t have to contend with the vast crowds which are usual in the warmer months at popular spots.  One such place was the Roman bath complex in Bath, here we were able to meander around the buildings and displays without being jostled by eager tourists trying to capture the perfect selfie.  This physical space allowed the imagination a chance to wander the halls of time.  A multitude of questions and possible scenarios playing out in my minds eye and so ‘A Roman Moon’ was born.

Bath complexes in the Roman period were not simply places to wash and clean the body but also places to meet, socialise, to be seen and make those all important contacts.  At the Roman town of Aquae Sulis (Bath) the baths rose to prominence from the late first century AD as a result of the natural hot springs which were a feature of the landscape and worshipped for many generations prior to the arrival of the Romans.

As with so many aspects of the Iron Age/Celtic landscape of the time, the natural springs here had its own diety who was recorded by the Romans with the name of Sulis.  The Romans were very good at adopting and blending local cultures with their own as part of their overall colonisation package. For the Romans the local goddess Sulis had much in common with one of their own – Minerva.  Thus the hot springs became dedicated to the amalgamated goddess of Sulis Minerva.

The success of Aquae Sulis (even the towns name pays homage to the goddess – ‘the waters of Sulis’) is down to it also being a place of pilgrimage.  People from all around would come to the town to make offerings or petitions to the goddess.  One such method to ensure the goddess knew what was required was to write a message on a sheet of lead.  For this purpose a trained scribe would be employed.  Once  the wording was just so the lead sheet was folded or rolled and then thrown into the sacred spring – a number of these have been recovered from the spring, mostly they were curses for relatively small wrong doings.

As well as the lead sheets, other gifts were found during excavations.  Thousands of coins (and even today people throw coins into the spring), jewellery, pewter dishes and cups usually inscribed with a dedication to Sulis Minerva.  The cups may have been used to drink the waters (as we continue to do so today) or as libation vessels.  The belief in the healing powers of the spring waters was an important part of the towns fame.

Besides Sulis Minerva there were within the temple complex depictions of other deities.

The rituals in Roman religion took place mostly outdoors, the temples buildings were often small affairs where only the priests or priestesses would be allowed to enter.  Public ceremonies would have been conducted outside in the surrounding precinct.  Within the precinct there would have been altars dedicated to the diety set up by individuals in anticpation of a divine favour or to give thanks, these would have been decorated in offerings of all kinds or with bowls of incense.

“The temple, in its original late first century form, was a purely classical building set on a high podium reached by a steep flight of steps.  Its porch was dominated by four massive Corinthian columns supporting an ornate pediment.  Behind lay a simple room, the cella, where only priests could enter to tend the flames kept burning around the life-sized cult statue of Sulis Minerva” (from ‘The Essential Roman Baths” – a guidebook). 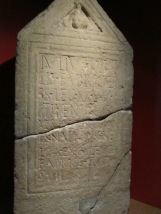 The above is a selection of the numerous altar stones and memorials found in the Roman layers during excavations.

The complex at Aquae Sulis was quite extensive – with facilities for men and women to bath seperately which was rare and spoke volumes about the wealth of the town.  At the heart of the complex is the Great Bath, a rectangular swimming bath surrounded by a walkway with alcoves for people to sit and relax in.  The bath itself was and still is lined with 45 sheets of Mendip lead.

The complex at Aquae Sulis was quite extensive – with facilities for men and women to bath seperately which was rare and spoke volumes about the wealth of the town.  At the heart of the complex is the Great Bath, a rectangular swimming bath surrounded by a walkway with alcoves for people to sit and relax in.  The bath itself was and still is lined with 45 sheets of Mendip lead.

The above shows a reconstruction picture of how the town may have looked at its height based upon what has been discovered through various archaeological excavations.  In “A Roman Moon” astute readers will note that I did away with the amphitheatre, replacing it with a Forum.  Why? Well, to begin with the evidence for an amphitheatre is at this stage is quite thin on the ground and I am sure that a town of such importance would have had a Forum.  In addition, you can also put it down to the authors whim, a bit of ‘literary licence’.

The river running beside the town is the Avon, known then as Afon which is Welsh for river (amusingly making the name of the River Avon, the River River)…

I hope you can see why the ancient town of Aquae Sulis inspired me to write ‘A Roman Moon’ – from the presence of Luna, the triple goddess and the sacred spring all play a part in Sarah’s story.

Just a little bit of rain...summer my arse! #rainraingoaway #pleasedontflood #aucklandsummer
Can't beat a sunny Sunday...#cheltenhambeach #aucklandsummer #summervibes #swimtime #summersundays
Sunny Sunday at the seaside 😁 #summervibes #summersun #cheltenhambeach #aucklandsummer #Sundays #swimtime
Today the sun came out play! It feels like forever since we had a decent summers day. Decided not to take it for granted, so popped to the beach for a delicious swim 🥰☀️🌊
Today's beach find...the top of a 19th century gin bottle. I really need to do one of those 'found in situ' videos, you would have heard me telling the dog all about it 🤣
Back to the museum today and clay pipes were on the agenda #history #archeology #artefacts #newzealandarchaeology #newzealandhistory #aucklandmuseum