A recent addition to my television viewing is a locally produced show – ‘Heritage Rescue’.  Along the veins of a reality tv show and borrowing loosely from home makeover shows and the UK’s ever popular ‘Time Team’ (the shows presenter once worked on the latter as a humble archaeologist), Heritage Rescue visits small local museums, spending time (usually around a week) and resources to inject new life into these establishments.  More often than not they operate purely on the fuel of volunteers.

One such museum was the Devonport Museum in Auckland – I am sorry to say that even though I have lived only a fifteen minute drive from this musuem I had never visited…a fact I hastened to amend after watching the two episodes dedicated to giving the wee museum a new lease of life.  Having never been to the museum prior to its appearance on the telly I can’t compare so the photos that follow are of the new look museum.

The one thing that has obviously remained the same is the essential fabric of the building.  The museum is housed in an old Presbyterian church which was moved to it present day location in an old quarry on the side of Mt Cambria in 1978.

On entering the museum to the left there is a timeline of Devonports history with a superb diorama of the local landscape taking centre stage.  I was fascinated to learn that once upon time it was possible to get a boat through at high tide directly from Narrow Neck beach to the Ngatringa Bay past what is now the golf course and along the present day Seabreeze Rd.

Some of the precious taonga on display.

Samples of goods from the later brickworks

Devonport itself is an area rich in history, not just because it was one of the earliest nineteenth century settlements but also it was well utilised by Maori with its safe landing beaches, excellent access to kai moana and fertile soils on the slopes of its volcanic cones.  Jutting out into the wider Hauraki Gulf it also provides an excellent vantage point of all who come and go into Auckland.  The museum effectively reflects this tapestry of Devonports past.

There are displays on the history of ship/boat building in the area, we are told that the foreshore was a hive of industry in the nineteenth century.  The above picture shows a model of New Zealands one and only remaining wooden light house which can be found just off the tip of Devonport, no longer being used as a light house but preserved as a historic site.

Shop window displays using real shop windows from the towns retail past gives the visitor an impression of what the main street may have once looked like. 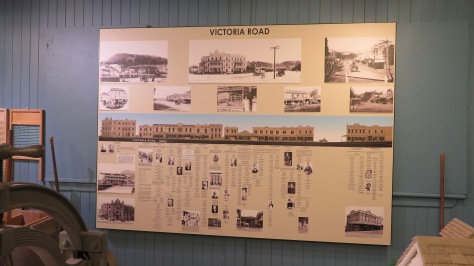 Devonport is well known for it old villas and colonial cottages – the museum has two models of these types of houses on display.  The one on the right is complete with washing on the line and a larder stocked with local produce. 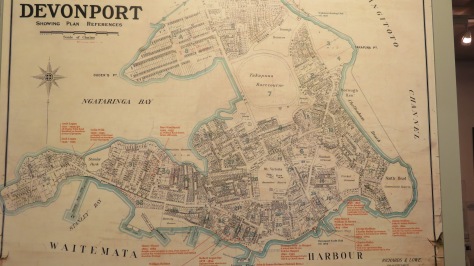 Overall our visit to the Devonport museum was very enjoyable, helped along by a friendly and informative volunteer who was able to answer my questions.  There is even a kids corner with old fashioned games for the littlies to have a go at and in a seperate room a research space is well appointed for those to local/family histories.  It is well worth a visit if you are in the  area and even if you’re not.

Patterns... mineral calcification in a geothermal stream #geothermal #waiotapu #rotorua #weekendadventures #naturalwonders
A long time ago when Tamaki Makarau was a twinkle in the Earth's eye a volcanoe erupted - one of many. The lava flowed out and through an ancient forest solidifying around the trees which by degrees burnt away leaving multiple rings of rock to show where a tree once stood...#aucklandnz #morningwalks #volcano #lava #ancienttrees
On my walk this morning I came across this. In times of crisis we find ourselves going back to the old ways...even if we don't realise it...😍 #beach #stonecircle #theoldways #2020 #auckland @visitauckland @aucklandlive
Lockdown walks #April2020 #lockdown #lockdown2020 #bushwalks #dailywalk #newzealand
Happy Easter! #easter #lockdown #april2020
Rangitoto from Granny's Bay 😊 #beach #beachvibes #loveauckland #Auckland #rangitoto #OurAKL #longbayregionalpark