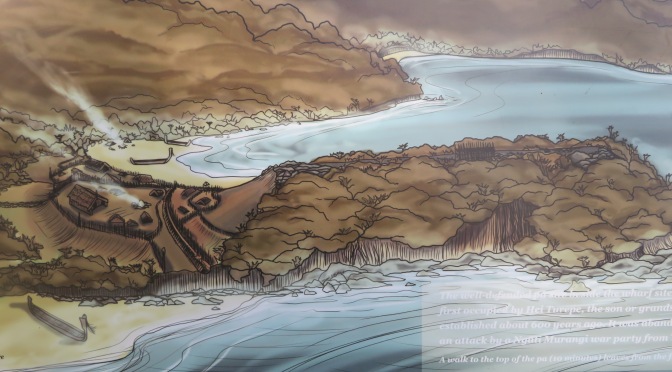 The Coromandel is a place rich in Maori history, the most obvious archaeological site are the many pa found on the coastal headlands.  The following are a few photos taken during a weekend in the coastal township of Whitianga.

Before we get to the photos, it is probably necessary for me to give you a brief explanation on what a Pa is, particularly  for those of you who are not familiar with the term.  The word ‘pa’ can refer to any Maori settlement, defended or otherwise, but most commonly it is used to refer to a type of site known as a hillfort – fortified settlements with palisades and defensive terraces.  The majority of pa sites are found in the North Island from Lake Taupo northwards – over 5000 have been recorded to date.  You can read more about Pa here.

The two Pa mentioned in the title of this blog are the Hereheretaura Pa and Whitianga Rock – both were Ngati Hei strongholds, although the latter suffered during a raid by a war party of Ngai te Rangi.  The reserve where Hereheretaura Pa can be found is at the southern end of Hahei Beach is one of two pa in the reserve.  The other – Hahei Pa –  is on the ridge above the track (seen below) but with minimal defensive earthworks unlike Hereheretaura Pa.

Whitianga Rock is on the opposite side of the estuary from Whitianga, a short ferry ride across from town takes you to the start point for a walk around the site.  The site is positioned on a thin finger of land jutting into the estuary harbour with steep cliffs on three sides.  By the time Captain James Cook arrived in 1769 the site had already been abandoned, even so it impressed Cook enough for him to state;

“A little with[in] the entrance of the river on the East side is a high point or peninsula jutting out into the River on which are the remains of one of their Fortified towns,  the Situation is such that the best Engineer in Europe could not have choose’d a better for a small number of men to defend themselves against a greater, it is strong by nature and made more so by Art”.

Yep it's still raining...photo taken on Friday before it all went to pants! #rainraingoaway #raindrops #rain
The beach took a battering yesterday...trees down, mini landslides and about half the sand is missing...#aucklandsummer #wherethesummer #aucklandbeach #fitzpatricks
Just a little bit of rain...summer my arse! #rainraingoaway #pleasedontflood #aucklandsummer
Can't beat a sunny Sunday...#cheltenhambeach #aucklandsummer #summervibes #swimtime #summersundays
Sunny Sunday at the seaside 😁 #summervibes #summersun #cheltenhambeach #aucklandsummer #Sundays #swimtime
Today the sun came out play! It feels like forever since we had a decent summers day. Decided not to take it for granted, so popped to the beach for a delicious swim 🥰☀️🌊