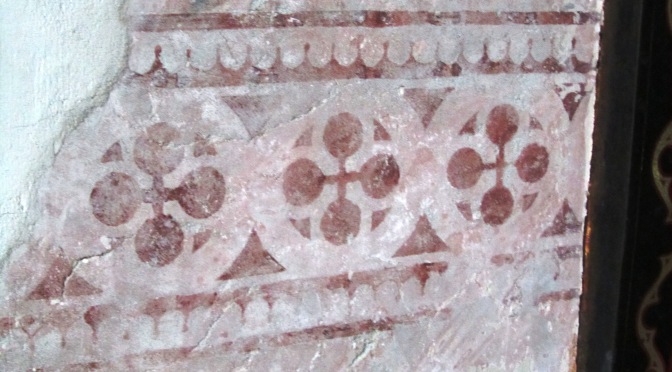 Breage is a small village some five kilometers from Helston in the west of Cornwall and on the face of it there is not much for the visitor to see.  Most will whizz past, intent on exploring other places.  But if you have the time do stop and pay a visit to the church, trust me, it is well worth it. 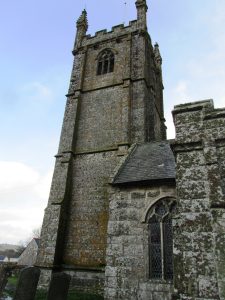 First A Little Bit of History

The earliest history of the area relates to the settlements upon Tregonning Hill overlooking Breage and neighbouring Germoe.  Here you will find Castle Pencaire an oval Iron Age hillfort.   On the northern slopes are two well preserved ’rounds’ or enclosed settlements (also Iron Age in date).  When the light is right it is also possible to see the remains of a field system and possible trackway associated with these sites.

In the church itself is a Roman ‘milestone’.  These stones (of which there are several in Cornwall) were mark stones set beside an actual road and inscribed to the Emperor.  This particular example is inscribed in Latin to “the Emperor Caesar our Lord Marcus Cassianius Latinius Postumus, pious, fortunate, august”.  It dates from AD 258 – 268.

The Domesday Book mentions lists this part of Cornwall as being held by the King under the name of the Manor of Binnerton.  It had eight hides of land with enough for sixty ploughs, there were thirty two villagers, twenty five smallholders with fifteen ploughs between them.  There was also two acres of meadow, two square leagues of pasture and half a square league of woodland.  Not forgetting the forty five mares, sixty sheep, thirteen cattle and five pigs.  At this point the church is not mentioned, although it seems likely that there was one, albeit an unprofitable one and therefore of no interest to the Norman assessors.

The earliest evidence for a church at this site is the red sandstone cross head.  Interesting in itself, for the red sandstone is not a material to be found in the local area and the style of cross is regarded to be of  Hiberno-Saxon in origin.  This early church may well have been made of timber and quite small, thus leaving no trace.  Later, the Normans built a larger and most likely more substantial church.  However, yet again very little remains of this church, just a portion of the Norman font was found outside the north door and is now incorporated into the present font.

Documents do state however, in the 12th century the Earl of Gloucester gives the church to the Abbey of Tewkesbury but after eighty six years the Earl of Cornwall takes it back and gives it to the abbey of Hailes.  There is an unsubstantiated note to the early church being dedicated in the year AD1130 to St Breaca.

The church you see today is 15th century in date  and is of a standard design for the period.  Originally it seems the church once had stained glass windows but during the Reformation Edward VI Commissioners appear to have ordered the destruction of these due to them depicting the saints and other emblems of idolatry.  Fragments of stained glass have been found around the churchyard.

Once inside the church your eyes are immediately drawn to the frescoes.   These are a series of five wall paintings, four of which are saints – Ambrose, Christopher, Corentine and Hilary. The church boasts one of the most remarkable wall paintings belonging to a style which has been labelled “Christ as Piers Plowman”. It depicts a crowned near naked and wounded figure of Christ surrounded by the tools of husbandry, fishing, cloth and metal-working trades. In the many wounds is, perhaps, a message about man’s sins and the continuing Passion of Christ.

These too appear to have suffered during the Reformation, even so they are still impressive.  It is often easy to forget how important art and pictures would have been in the past, for a society where the majority of people could not read.  Visual depictions of their stories either Biblical or otherwise would have been important. 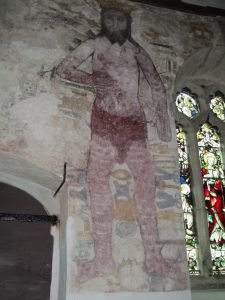 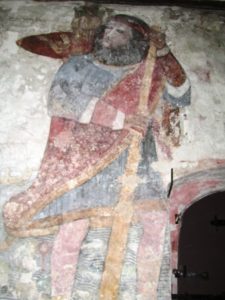 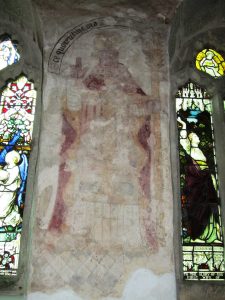 Apart from the painted figures there are also a variety of other decorations such as the borders around the windows.   Perhaps one of the most surprising revelations which I took away from our visit was how colourful churches would have been in the past. 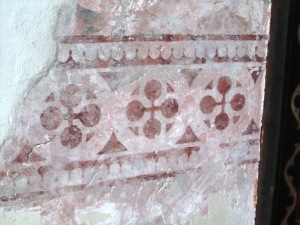 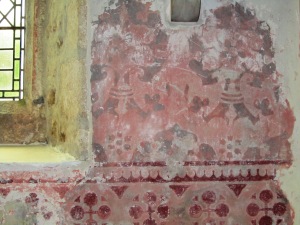 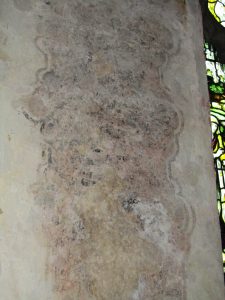 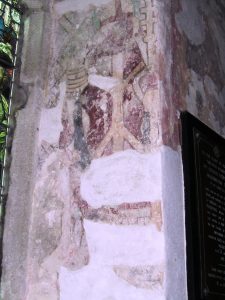 The church is dedicated to St Breaca (hence the name Breage).  As with so many of these early saints it is difficult to distinguish fact from fiction.  The following is the traditional view and not necessarily what actually happened.

Breaca was said to be an Irish missionary who travelled with vast hoard of other Irish missionaries landing at the mouth of the Hayle River at around AD500.  Their drive to convert the Cornish was firmly rejected and many skirmishes ensued.  Castle Pencaire (mentioned above) has in the past been referred to as ‘Loban Rath’, the place were the missionaries fled to under threat from King Teudar.

St Breaca was one such missionary who took up residence on Tregonning Hill.  Tradition has it she built a small church near Chynoweth and Tolmena on the south eastern slopes of the hill.  No evidence for this remains.  Eventually, once hostilities had calmed Breaca is said to have moved to the current place we now call Breage, establishing her church there on the hill.

Breage has had several names in the past – in Cornish it is either Eglosbrek, Eglos Pembroc or Eglospennbro.  Eglos means church, the ‘brek’ or ‘broc’ are derivitives of Breaca and ‘pem’ or ‘penn’ refers to a hill.  Other more recent names have been St Breock-in-Kirrier (Kirrier or Kerrier being the old hundred) and St Briack.

Like so many churches in Cornwall, the tower is easily visible for many miles around and even out to sea.  Making it an important landmark for travellers.

The following is a link to an old book titled ‘Story of an Ancient Parish – Breage with Germo’.  Written in 1913 by H R Coulthard, it is in many ways a product of its time however, it still makes for an interesting read and is free to download. 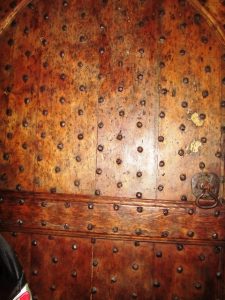 One thought on “The Frescoes of Breage”

We recently had a bit of a night, weather wise, and this was what greeted me and the dogs on our Wednesday morning ramble to the beach... #wildweather #stormyweather #winterwalks #winterweather #honeyilosttheboat #nowwheredidpark #waitemataharbour #aucklandnz #expecttheunexpected
WIP - working title, etc (@hannahze_maree), no prizes for guessing the location, which was obvious from the end of 'A Warrior Moon' but there are some twisty bits for our heroine to contend with... Included is a photo of my writing companion - Maze - do not worry she always sleeps like that, easier to keep an eye on me 😁 #indiebooks #indieauthor #indie #wip #mythsandlegends #celticireland #indieauthorcommunity #shouldbeactuallywritingandnotinstagramming
I always forget to post for #caturday so here are a few of our furbaby, Daisy Cat #catsofinstagram #catoftheday #instagramcats #lovecats #catwithattitude
Following on from my previous post...two more old postcards. The top is of Gurnards Head, a remote headland on the West Penwith coast in Cornwall. The bottom one is from Lands End, also Cornwall. #oldpostcards #landscapes #cornwall #westpenwith #cornishcoast #lovecornwall #history #thepast
In my local charity book shop there's a shelf stacked with old postcards which I will flick through out of curiosity. Imagine my delight at finding first this one of the Roman baths at Bath, quickly followed by one of the Roman mosaic from the villa at Bignor in Surrey 😁😁 both are probably from the mid 20th century. #oldpostcards #roman #romanmosaic #romanbaths #Bath #bignorromanvilla #thepast #ancientworld #charityshopfinds
New blog on the website...link in mybio😁 #mythsandlegends #folklore #megaliths #ancientstones #unitedkingdom #britain #archaeology #thepast #storiesfromthepast