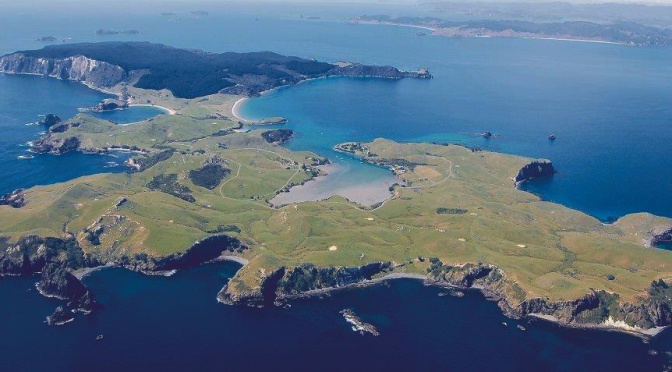 Yesterday was the first day of New Zealand Archaeology Week, it is the first time in New Zealand that archaeology has been celebrated with its own ‘week’.  As part of this celebration of the past I attended a lecture at the Auckland Museum about the long term archaeological project being undertaken on Great Mercury Island entitled The Changing Face of Archaeology – The application of technology to the Ahuahu Great Mercury Island Archaeological Project.  The lecture was delivered by Louise Furey, Rebecca Phillipps and Joshua Emmitt.

Great Mercury Island is situated off the east coast of the Coromandel Penninsula and as the name would suggest is the largest island in the Mercury Group.  The purpose of the project is to examine the history of the Maori occupation on the island.  As an island it provides the ideal opportunity to study a landscape as a whole and how people utilised and interacted with the landscape over time.  This post is not a comprehensive study of the archaeology of the island, it is only a brief foray into what is a complex landscape.  I have included links for those who wish to do read more about the work that is being carried out by the archaeologists.

There is certainly plenty of archaeology on the island to keep the archaeologists busy for quite some time.  Of that which is visible above ground there are twenty-three Pa (defended sites with ditches and banks), large areas of gardens (recognisable by the lines of cleared stones), kumara storage pits, stone working sites and shell middens.  As recent excavations have indicated there is even more evidence lying beneath the surface.

Prior to the current project the island was subject to two other single event excavations.  The first being undertaken in 1954 in the early days of New Zealand Archaeology by then then newly appointed lecturer in archaeology at the University of Auckland Jack Golson.  With a party of archaeology students he excavated a terrace on the Stingray Point Pa (Matakawau) identifying two kumara pits, each pit had more than 80 post holes suggesting a long period of rebuilding the roof structures.  Golson’s work was never published although this is soon to be rectified.

In 1984 Professor Geoffrey Irwin of the University of Auckland excavated a Pa in Huruhi Harbour. In 2009 a sever storm eroded about ten metres of sand from White’s Beach to reveal a shell midden and a rich charcoal layer.  Bones from dogs and fish were found within the midden which was dated by radiocarbon to c.1400AD.

From 2012 the University of Auckland and the Auckland Museum have been working in conjunction with Ngati Hei on the previously mentioned long term project.  The island is visited on regular basis with the main excavation season being held in Febuary, which is also a training dig for archaeology students from the university.  The lecture held yesterday focussed on some of the finds from the excavations such as the large quantities of obsidian flakes some of which come from as far afield as Taupo, Mayor Island and closer to home on the Coromandel Peninsula.  Although work/research is still ongoing it is becoming clearer how important Ahuahu is in our understanding of the early prehistory of New Zealand.

Because ultimately excavation is destruction it has long been universally acknowledged how important it is to record as much detail as possible.  In the past this was often a labour intensive activity, if done at all.  Today’s archaeologists now have a raft of technological tools at there disposal and at Great Mercury they are taking full advantage of what is available.  The technology being used on site to record every find, feature and layer includes total stations, laser scanners and drones are in everyday tools for these excavations.

You Tube has several video’s of work being done on the island – the following are links to a couple to get you started if you are interested.

On the Auckland Museum website there is also information on the project  – Great Mercury Island Expedition.

The Making of Maori Society

Variable horticulture within a small garden on Ahuahu