In 1999 I visited the fascinating island of Malta with my then boyfriend (now husband), dragging the poor lad around more archaeology than he had seen in all his life…

Whilst there is a huge amount of archaeology in Malta, from all periods in time, it was the megalithic monuments which caught my attention during this trip.  Not to mention we only had a week on the island and you would probably need a whole lot more time to visit all the archaeological sites Malta has to offer.

Unfortunately at the time of our visit the Hypogeum or Hal Saflieni was closed for some desperately needed love and attention – much to my disappointment.

It is believed the first human inhabitants of Malta came from Sicily in the Neolithic.  This early phase is named for the site that epitomises this time – Ghar Dalam, a cave site in the south of the island.  This early phase begins approximately 5000BC and ends with the first temples being built around 4100BC.  The Temple Period is divided into four phases.

The temples for which the first two phases are named have now disappeared either under the urban sprawl of Valetta or as is the case of Mgarr subsumed into the backstreets of the town itself.  The Safliene phase is characterised by Hal Safliene (Hypogeum), a subterranean temple carved out of the limestone bedrock to accommodate 7000 dead.

The final Tarxien phase is the one visitors to Malta will be most aware of.  The temple complexes of Tarxien, Mnajdra, Hagar Qim on Malta and Ggantija on Gozo constitute the climax of the temple building phase.

Although the temples complexes span quite a period of time they do have some common features in terms of the architecture.  To begin each will have a oval forecourt bounded by the temple facade constructed of large stone slabs.  The doorways all consist of two large uprights topped with an equally large lintel.  The passageways are always paved.  Once inside the complex, the visitor finds themselves in an open area which then  gives way to a series of D-shaped chambers or ‘apses’. 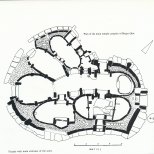 Plan of the main temple of Hagar Qim. (from ‘Malta An Archaeological Paradise’ by A Bonanno)

Plan of the lower and middle temples at Mnajdra. (from ‘Malta An Archaeological Paradise’ by A Bonanno) 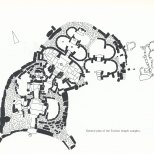 Plan of the central part of the Tarxien temple complex. (from ‘Malta An Archaeological Paradise’ by A Bonanno)

The main variation from one site to another is the number of ‘apses’. Often the walls of the temples are decorated with carvings in relief of spirals and naturalistic forms of plants and animals.  Cup marks are also a popular form of decoration.

Here are some of the photos of this trip.

Detail of one of the doorways of Hagar Qim showing the stone stippling which is a common decoration form at this time.

The back of Hagar Qim.

Inside one of the apses at Hagar Qim.

A porthole entrance encased by a trilithon at the middle temple at Mnajdra.

Another of the square entrances with stone stippling, this time at the lower temple of Mnajdra. 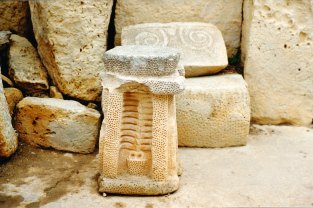 A low altar depicting in low relief a plant growing from a pot. In the background a spiral relief – From Hagar Qim.

Entrance to Tarxien – this temple complexcan be found in the suburbs of Valetta.

The remains of Tarxien (and a rather ‘over it’ boyfriend)…

A large basin discovered in the first left apse of the middel temple of Tarxien – it was hewn from a single block of stone.

In the first apse on the right of the south temple in Tarxien is the remains of this statue. It would have dominated the space standing at least two metres tall.

The Megalithic European by Julian Cope

Got up bright and early for a trip to Kakamatua...a favourite dog walk...more or less had the place to ourselves. #dogwalks #rescuedog #beachwalks #saturdaymorning #lovedogs #kakamatua #bestwaytostartaday 😍💜🐶
When every night is pretty much the same (thanks pandemic 😬) it seemed a good idea to get the fire going and toast some marshmallows 🔥🔥#fire #lockdownnights #upyourscovid #toastedmarshmallow @hannahze_maree
So I disappeared down this rabbit hole today...🐰😁 #indieauthor #indieauthorcommunity #writerslife #writerscommunity #researchlife #rabbithole
It's Sunday afternoon here in NZ so my thoughts start to wander to 'am I doing enough self promotion?' So here is a contribution for #selfpromotesunday with @julieembletonauthor - when I took my books for a walk on the beach...as you do...
All dogs love story time 😁
Is it a bookmark or is it currency? 🤔 Both but neither...yes it is currency (the Vietnamese Dong) and yes I use it for a bookmark but mostly it is reminder of a fantastic adventure with my family in Vietnam before all this other stuff happened. Do you have favourite bookmark? #bookstagram #bookmarks #indieauthor #vietnam #holidaymemories