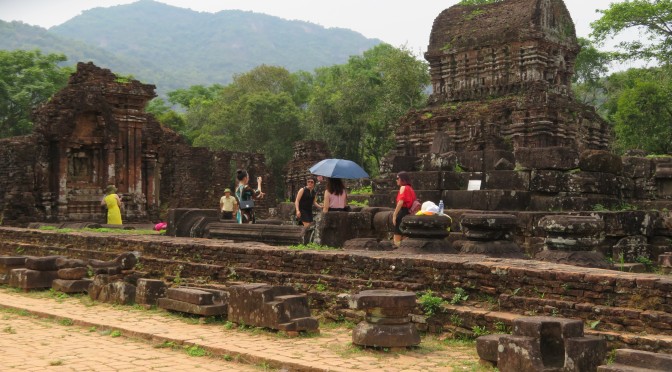 During a recent holiday in Vietnam I visited the temple precinct of My Son, the principal religious center of the Champa. The following are a few photos (read many) of this day trip with a bit of background for good measure.

Who were the Champa?

Essentially the Champa were a collection of independent polities who ruled central and southern Vietnam from around the second century AD. The independent states became united in the fourth century under the rule of King Bhadravarman of Indrapura during the 4th century. Between the 7th and 10th centuries the Cham controlled the trade in spices and silk out of the South China Sea. Hoi An was the main port of the principality of Indrapura and whilst the capital of the Champa was in the area of the modern village of Dong Duang – both are situated near to My Son.

From around the fourth century the Cham adopted Hinduism as their principle religion although many were eventually converted to Islam from the 10th century onwards. Today whilst the majority are Muslim there are still some that retain the Hindu faith and traditions.

The name Champa comes from the Sanskrit word ‘campaka’ which refers to species of flowering tree similar to a magnolia.

My Son is situated in a valley near the village of Duy Phu approximately 69km from DaNang and was the site of religious ceremonies for the HIndu Cham rulers between the 4th and 14th centuries. It also served as a royal burial place. There are in excess of seventy temples in addition to many stele containing important inscriptions in both Sanskrit and Cham.

The Hinduism of the Champa was Shaiva with elements of local religious cults such as that of the earth goddess Lady Po Nagar. A number of the features at My Son are the linga – a black stone pillar representing Shiva and the yoni representing the mother.

Unfortunately the valley was carpet bombed by the Americans during the Vietnam war and many of the temples were severely damaged and in some cases totally destroyed. In recent years efforts have been made to rebuild the temples (the work is ongoing).

All but one of the temples are constructed from red brick (the only stone built temple is in the area known as B1). The decorative carvings which adorn the temple exteriors were cut directly into the bricks themselves. Although there has been some discussion about the type of mortar used in construction of the temples, it is now generally accepted that the mortar consisted of a sticky clay solution similar to the brick clay.

There are four types of buildings –

In addition to the many sculptures and statues there are numerous stele (32 known in total) dating between the 5th and 12th century. The stelae can refer to a foundation of a temple, altar or pedestal. As historical documents they are very useful as they list names of kings, cities and occasionally describe important historical events such as the wars between Champa and Cambodia in the 12th century. The statues and carvings are usually representations of Shiva, also there are guardian statues found outside the temples.


The monuments of the My Son sanctuary are the most important constructions of the My Son civilization. The tower temples have a variety of architectural designs symbolizing the greatness and purity of Mount Meru, the mythical sacred mountain home of Hindu gods at the center of the universe, now symbolically reproduced on Earth in the mountainous homeland of the Cham people. They are constructed in fired brick with stone pillars and decorated with sandstone bas-reliefs depicting scenes from Hindu mythology. Their technological sophistication is evidence of Cham engineering skills while the elaborate iconography and symbolism of the tower-temples give insight into the content and evolution of Cham religious and political thought.

Images of winter...#winter #images of winter #fungusofinstagram #fungus #rainbow #spiderweb #nature #naturephotography #lovewhereyoulive #antidepressant
Last night @aidytrek and I went and viewed the new exhibition at @aucklandmuseum. Amongst all the beautiful objects and treasures from ancient Greece there was this...a small statue of a man taking his cheese to market on the back of his donkey. Very homely...until you realize that the man us naked...that not be cheese I'd be eating and I love cheese! 🤣😝🤣 #aucklandmuseum #ancientgreeks #ancientart #nakedandcheesy #museumexhibition
Volcanoe Saturday- this time I managed to get everyone up Maungarei/Mt Wellington. It's a beast of hill, with the tallest scoria cone in the Auckland volcanoe field and standing some 444ft above sea level.
Tuesday is writing day, thus far I've done 3k words (yay me 😊 ) quite a mean feat given my companions desire to get a close as possible to the action! #writersofinstagram #writerscommunity #writerslife #dogsofaotearoa #dogsofinstagram #rescuedogsofinstagram #dogcompanion #fortheloveofdogs
Meet the archaeology department mascot...Anubis 😁 please do not panic he is a plaster cast, not the real thing!
What happens to old labels when a museum updates them? Well, in this case they become a feature in the museum basement 🙂 Collections of everything...#internationalmuseumday #collections #museums #museumlabels #nothingisthrownaway #museumlife