Blue sea, blue sky, warm sunshine and a gentle breeze.  It was a perfect day for a trip to the beautiful island of Kawau in the Hauraki Gulf .

Kawau Island is roughly 8 kilometres long and 5 kilometres wide, its highest point is Mt Grey at 182metres above sea level.  Kawau is Maori word for cormorant.  For those wishing to experience island life access is by ferry.  The ferry to the island leaves from Sandspit, just north of Warkworth.  Full of day trippers slathered in sunscreen it visits the various wharves dotted along the sheltered side of the island delivering the mail, groceries and other goods.  For the visitor it is a good introduction to an island which has only two short private roads and where the majority of properties rely on access to the sea.  Neighbours visit neighbour either on foot or by boat and kayak. 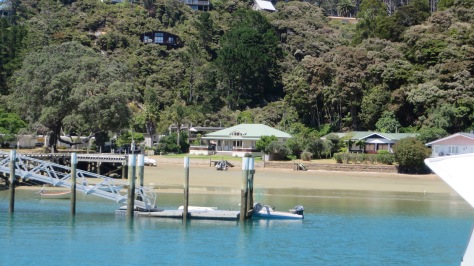 Prior to the Europeans Kawau was often fought over by local Maori.  During the 18th century a ‘pirate’ like group of Maori lived on the island – there are at least three known pa sites (two on Bon Accord Harbour and one in the north of the island).  According to tradition the Kawau Maori would attack other Maori travelling around the island, something which was not tolerated for long.  Eventually, other local tribes from the mainland banded together and attacked the Maori of Kawau.  The island tribe was completely massacred and tradition says a large feast ensued at Bostaquet Bay where parts of their enemies were cooked and eaten.  A tapu was placed on Kawau making it no-go area for Maori – the tapu is still in place.

The next important phase of the history of the island began in 1842 with the discovery of copper and manganese.  Miners were brought in from Wales and Cornwall to work the mines and smelting works.  The population of the island at this time was approximately 300. 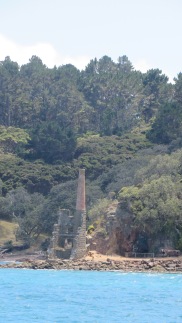 The ruins of the pumphouse 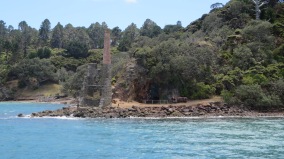 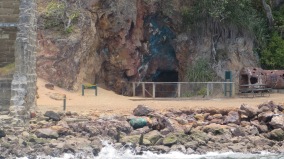 One of several mine shafts to be found on the island.

The remains of the smelting works can be seen in Bon Accord Harbour just along from the present day yacht club.  On a small point between Dispute Cove and South Cove there is also the ruins of pumphouse constructed to alleviate flooding issues.  The pumphouse would not look out of place in Cornwall.  In 1844/45 the mine produced some 7000 pounds of Copper which represented a third of Auckland’s exports for that year.  Unfortunately issues with flooding, shipping and infighting resulted in the mines being closed down in 1855.

The remains of the smelting works at Bon Accord Harbour.

In 1862 Sir George Grey, then the Governor of New Zealand paid 3,700 pounds for Kawau Island and turned it into a private retreat.  He turned the former mine managers house into the imposing mansion you see today and imported many exotic plants and wildlife to the island.  In 1888 Sir Grey sold Kawau and Mansion house had several owners and in 1910 it became a guest house and a popular retreat for Aucklanders.  The last private owner sold the house in 1967 to the Government for inclusion in the Hauraki Gulf Maritime Park.

However it was not until the late 1970s was a plan put together to preserve the historical character of the island and thus the house.  Today 10% of the island is in public ownership as the Kawau Island Historic Reserve (and includes Mansion House and Bay) which is administered by the NZ Department of Conservation.   One of the many ongoing issues faced by the island is the damage done to the native flora and fauna by Sir Grey’s introduced species, namely the wallabies and possums.  Both animals have been responsible for the destruction of much of the native bush.  However, slowly but surely the tide is turning and now there are kiwi, bellbirds, tui, kereru and more returning to the island.  Kawau Island is in fact home to two thirds of the entire population of the North Island weka.

We recently had a bit of a night, weather wise, and this was what greeted me and the dogs on our Wednesday morning ramble to the beach... #wildweather #stormyweather #winterwalks #winterweather #honeyilosttheboat #nowwheredidpark #waitemataharbour #aucklandnz #expecttheunexpected
WIP - working title, etc (@hannahze_maree), no prizes for guessing the location, which was obvious from the end of 'A Warrior Moon' but there are some twisty bits for our heroine to contend with... Included is a photo of my writing companion - Maze - do not worry she always sleeps like that, easier to keep an eye on me 😁 #indiebooks #indieauthor #indie #wip #mythsandlegends #celticireland #indieauthorcommunity #shouldbeactuallywritingandnotinstagramming
I always forget to post for #caturday so here are a few of our furbaby, Daisy Cat #catsofinstagram #catoftheday #instagramcats #lovecats #catwithattitude
Following on from my previous post...two more old postcards. The top is of Gurnards Head, a remote headland on the West Penwith coast in Cornwall. The bottom one is from Lands End, also Cornwall. #oldpostcards #landscapes #cornwall #westpenwith #cornishcoast #lovecornwall #history #thepast
In my local charity book shop there's a shelf stacked with old postcards which I will flick through out of curiosity. Imagine my delight at finding first this one of the Roman baths at Bath, quickly followed by one of the Roman mosaic from the villa at Bignor in Surrey 😁😁 both are probably from the mid 20th century. #oldpostcards #roman #romanmosaic #romanbaths #Bath #bignorromanvilla #thepast #ancientworld #charityshopfinds
New blog on the website...link in mybio😁 #mythsandlegends #folklore #megaliths #ancientstones #unitedkingdom #britain #archaeology #thepast #storiesfromthepast