Summertime in New Zealand means roadtrips and exploring all that our lovely country has to offer.  Me and mine decided to spend some time in the goldmining town of Waihi and of course as always this meant a lesson in history, in particular the area around the Karangahake Gorge.

The Karangahake Gorge is situated between the Coromandel and Kaimai ranges and was formed by the flow of the Ohinemuri River.  It’s steep sides are covered in native bush, a haven for those wanting to experience the great outdoors.  There are plenty of walks and cycle trails to enjoy or you can simply sit by the river and enjoy a picnic.  However not so long ago the visitor would have been greeted by an entirely different scene.

On this visit we did the Windows Walk which takes you past and through several of the stamping batterys and the many associated building ruins then into the old tramway tunnels along the Waitawheta Gorge (an offshoot of the Karangahake Gorge).  Unlike other goldmining areas, alluvial gold is rare in the gorge and almost all of the gold and silver recovered from here was done by deep quartz mining.  This meant only the large well funded companies could afford to operate in the gorge.  The three main players were the Talisman Mining Company, The Woodstock Mining Company and the Crown Mining Company.  (The latter will ring some bells with those of you interested in Cornish mining history as they were a major player in the mining industry of Cornwall.  In fact many of the miners came from Cornwall which was at the time undergoing a decline in mining.  Their skills in hard rock mining was in great demand in colonial lands).  Today so much of the ruins are covered in dense bush, their edges softened by vegetation and with the sound of either the Ohinemuri or Waitawheta rivers filling your ears it is hard to imagine this as a place of heavy industry.

“A continous rythmic thumping once filled the air here, as stamper batteries (gold recovery plants) of the Talisman, Woodstock and Crown Mining Companies pulverised quartz rock to free the gold within.” (taken from an information board at the beginning of the walk)

Much of the ore came from the steep sided Waitwheta Gorge and was then transported via aerial tramway across the gorge to the tramway and delivered to the stamping battery where it would undergo a series of crushings to extract the gold and silver which was then smelted into bullion bars.  The Talisman and Crown Mines were two of the largest of their type in New Zealand and together produced in the region of four million ounces of gold bullion.

The following are some of the photographs taken during our time exploring the industrial archaeology of the Karangahake Gorge.

“Once the ore had been crushed in the upper levels of the battery the fine powder that resulted was subjected to the cyanide process.  This involved mixing potassium cyanide with the finely crushed ore in tanks for several days then drawing off the solution and passing it through wooden boxes where the dissolved gold and silver precipitated as a black sludge on zinc shavings.  The sludge was then treated with sulphuric acid to remove the zinc.  The residue was then smelted into bullion bars (of gold and silver)” – From the above information board.

One of the main features of the Windows Walk is the tramway, part of which goes through the side of the gorge (a torch is a must if you do this walk).  In its heyday, the ore was transported via tram but because of the steep sides of the gorge a trail had to be cut out of  and through the rockface.

A bit further on from the modern suspension bridge is the remains of the Crown  Mine.

Today goldmining in the area is representated by the large open cast mine in nearby Waihi with the now defunct Cornish Pumphouse from the earlier 19th Century Martha Mine standing ever watchful over. 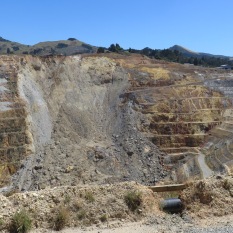 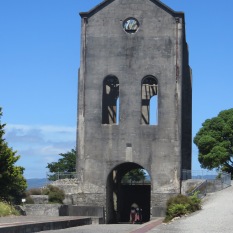 I always forget to post for #caturday so here are a few of our furbaby, Daisy Cat #catsofinstagram #catoftheday #instagramcats #lovecats #catwithattitude
Following on from my previous post...two more old postcards. The top is of Gurnards Head, a remote headland on the West Penwith coast in Cornwall. The bottom one is from Lands End, also Cornwall. #oldpostcards #landscapes #cornwall #westpenwith #cornishcoast #lovecornwall #history #thepast
In my local charity book shop there's a shelf stacked with old postcards which I will flick through out of curiosity. Imagine my delight at finding first this one of the Roman baths at Bath, quickly followed by one of the Roman mosaic from the villa at Bignor in Surrey 😁😁 both are probably from the mid 20th century. #oldpostcards #roman #romanmosaic #romanbaths #Bath #bignorromanvilla #thepast #ancientworld #charityshopfinds
New blog on the website...link in mybio😁 #mythsandlegends #folklore #megaliths #ancientstones #unitedkingdom #britain #archaeology #thepast #storiesfromthepast
Tidbit Tuesday (is that a thing? 😁) or should I have saved it for #wipwednesday #wip #indieauthorcommunity #indieauthor #indiebooks #bookfive #ihavenoideawhathappensnext #distractedbyinstagram
'You can't have rainbows without rain' - have no idea who said that first but it's the first thing that pops into my head on mornings like this 😊 #rainbows #rainyday #dogwalksintherain #aucklandnz #waitemataharbour #fitzpatricksbay